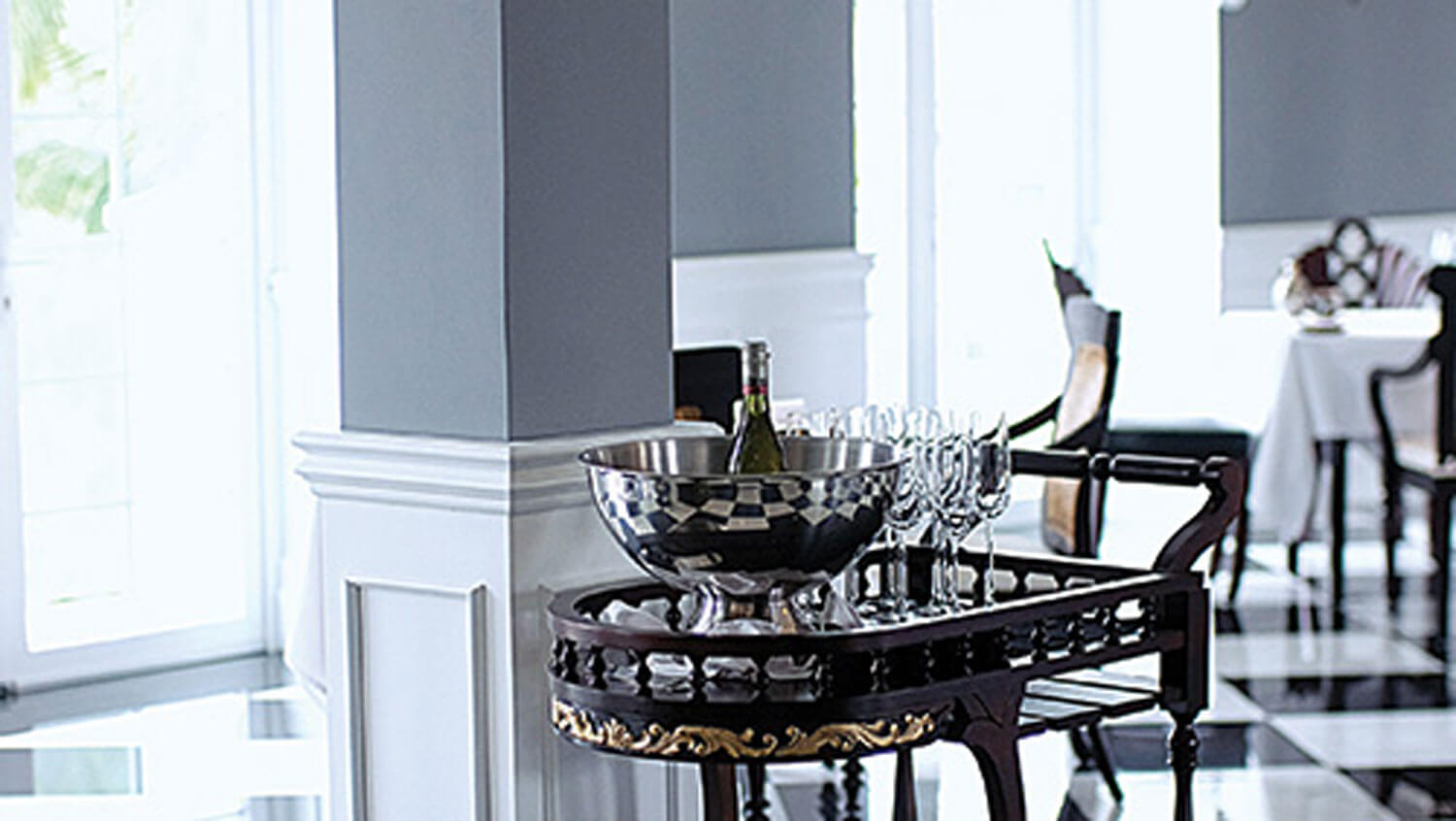 If the housing estate Viceroy Bali (a family-owned luxury hotel overlooking the spectacular Jungle ravine) is anything to go by, you know that their newest venture, Apéritif Restaurant and Bar is set to impress.

You’ll just have to ignore the dreary white facade of the stand-alone building first, devoid of the same ‘village-chic’ pleasantries donned by Viceroy; encourage your buggy driver to step on it. But once inside the cool realms, the expanse that flourishes at the turn of the corridor is mesmerising, especially for a space-depraved Singaporeans like myself. Polished black and white marble floors, grand chandeliers that dangle from the pyramid ceiling and a stunning state-of-the-art open kitchen garner the same look of awe that Anastasia Steele flashes when Christian Grey flies her in his private helicopter over the city. Cue Ellie Goulding’s ‘Love me like you do’ for the extra googly-eyed effect.

Apéritif isn’t exactly at the tip of everyone’s tongue. For one, it’s new, the smell of fresh paint still wafting in the air. Secondly, it isn’t just a mere amble away from the tourist bedlam of Bali’s high street in Seminyak. It takes a whole hour and a half to navigate through traffic from the airport: expect sharp twists and turns with the musical accompaniments of motorbikes horns, and finally a restful albeit bumpy ride through the padi fields to get your destination. Unless you’re Christian Grey, don’t expect a day trip to the restaurant to be a walk in the park. It’s purposeful and almost cathartic. You will definitely be hungry upon arrival.

The adjoining bar will be quick to soothe those ruffled feathers. Inspired by the roaring 20s, the space screams Dutch Colonial chic; heavy teak furniture is broken up with chestnut banquettes, warm gold and bronze accents, and palladium windows that open up to immaculate views of lush padi fields. Drinks are curated to reference its Bali locality with fun Southeast Asian spin-offs on the classics. The Lemon 3 Times hustles up the zesty powers of lemon juice, lemongrass and kaffir lime syrup together with the citrus tones of the gin; the beverage sings a bright and cheery tune. More in line with the aperitif culture, the Tamrillo Negroni has its usual inherent bitterness balanced by a surprising tanginess from its witty insertion of Tamarillo fruit. Island life and its lack mundanity are well-respected at Apéritif. The bar operates from 4pm to 1am, encouraging long drawn pre-dinner drink sessions (hurray!) and perhaps a cheeky little after-dinner tipple to put those demons to rest.

Now on to the food. It’s ‘Global Eclectic’, exactly what a fresh graduate would say about his newfangled approach to life upon returning back from a ‘life-changing’ gap year. Ignore that. Instead, focus on fine-dining cookery that does not implicate itself. It’s food without borders conceptualised by a boldly whimsical wunderkind chef—keeping you on your toes. If you’re open-minded, your impression of this fine dining oasis will definitely thrive.

The meal kicks off with a bunch of moreish snacks. Gently poached Lombok oyster possesses both meatiness and brininess that work beautifully to counter the intense earthiness of spirulina. Umami is reinforced by seaweed and smoked oyster emulsion. There’s also the Tomato tart which is heaved to your mouth on a parmesan short-crust occupied by lemon whey and kombu seaweed butter. Diners gasp with shared enthusiasm as an ornate bread trolley is wheeled up. “Sourdough, Fennel or Black Rice Bread?” Heck, I wanted all of it. And the staff will pander to your hankerings, watching with critical eyes as you heap truffle butter onto toasted bread.

Chef Nic Vanderbeeken’s imagination runs wild. There’s a Parrotfish Ceviche, salt-cured and dried overnight for more pronounced flavours, the Peruvian saucing agent of leche de tigre is given a Filipino inception with hand-squeezed coconut milk and a touch of lime. Then this is butchered with yuzu and mirin, “Japanese touches,” he explains. I wince. You may feel differently about this worldly approach, which appears to be slightly contrived. I opt for the Martino instead, a wagyu tartare unabashedly rich with grapeseed oil, capers and paprika. It takes its inspiration from the traditional Belgium sandwich of legends—Martino Baguette. Further prying reveals that the Filet Américain is Chef Nic’s grandparents’ recipe, a favourite for when the game season arrives. Instantly, the vibe is markedly different, as the backstory helps to sprinkle that extra “oomph” over the quail egg, black garlic emulsion and pumpkin meringue kisses.

Bold, memorable and very pickled. The next few dishes approach the bench with enigmatic smiles. A mesmeric Karedok builds concentric circles of pickled kale, daikon and eggplant topped with tofu cream. Every mouthful is wet with kemangi (Thai lemon basil) and tamarind peanut sauce. The Papua Crab, blue crab annealed under a meticulous armour of pickled kohlrabi and ikura, is exactly what you want when you come to a place like Apéritif. You will find pockets of culinary pleasure in the gulai sauce. If you have it in you, ask for more.

You know how it’s like when you wait for that last razzle-dazzle to appear on your plate? One bite into the Iberico pork and I’m flushed with re-assuredness. In an uncertain world where cultures clash and converge, certain truths hold true—meat is king, or at least in my world it is. Apéritif just acquired a new and avid fan.

The Iberico pork doesn’t fall into reckless hands here. The beautiful piece of meat is a come-hither mix of Indian Picallili, pickled pumpkin and strewn with shards of chicharron for oleaginous interjections. The salt-flecked crunchy skin offers a great counterpoint to the flavourful flesh and bejewelled jus stitched from kluwak nuts that impart an earth-shattering coffee like profile. Chef Nic’s prowess is further affirmed with the Venison Wellington. You’ll smell it first—the air weighing heavy with buttery wafts of freshly baked pastry as yet again, another trolley glides across those gleaming floors. The decorated package is sliced meticulously with a serrated knife to reveal a trifecta of venison, kale and foie gas. I hold in a blissful sigh for fear of being coined melodramatic by my fellow diners—and washed it down with the tobacco heady Montes Alpha Cabernet Sauvignon 2014. The dish is given a king’s coat of mushroom rendang sauce and fortified with black truffle mash potatoes. Tapping into my fundamental affection for all things meaty, this went down without a hitch.

Too many restaurants simply give up when it comes to desserts. Thankfully, that’s not the case with Apéritif. The duo of Belgian Chef Nic Vanderbeeken and American-born Pastry Chef Alexander McKinstry gives you a solid insight into their childhood with the ‘Cake Batter Memories’—a charismatic pre-dessert that may involve messy spills of apple cake and brownie batter, fudge-y lip corners and a cacophony of laughter echoing through the hallways.

The customary cheese course is conceptually brilliant. It speaks with a single voice of conviction which moves from a mound of goat cheese milk skin encased in burrata and goat cheese to rich brown butter ice cream and nipples of traditional accompaniments. The combination is ravishing, but save space for the PB&J. The cocoa rich labour intensive dessert stands out as thoroughbred show pony in a rather quotidian representation of an American school lunch. Peanut butter panna cotta is dressed to the nines in a velvet coat of chocolate made specially by a Belgian chocolatier in Yogyakarta. There’s extravagance in the accompanying peanut butter and praline base and the Kintamani Mulberry sorbet provides a sharp relief. A doggie bag with your name on it supposedly holds the PB&J hangover cure for the next morning, and it leaves you with a feeling that you get when you put your benumbed paws on a warm cup of hot chocolate after enduring frigid snow conditions.

Here at Apéritif, they clearly love what they do. And they do so with aplomb and enthusiasm. Even going to the bathroom provides a different vantage point into the pride and meticulousness poured into the concept (Selfie lovers, please bring your phones with you). It’s early days for the restaurant, but the team has a strong voice and killer menu that will give your senses a jolt. I adore Chef Nic and Chef Alexander, so unless you’re the fun police (the boys have quite the knack for music and other frivolities of life)—you will learn to let your hair down, too.

Clean, Health, Safety & Environment Smart casual or cocktail attire is requested. We ask that you please refrain from wearing sports clothing or beachwear, including t-shirts and flip-flops.