Why Bali’s New Fine-dining Restaurant Apéritif is Worth Visiting 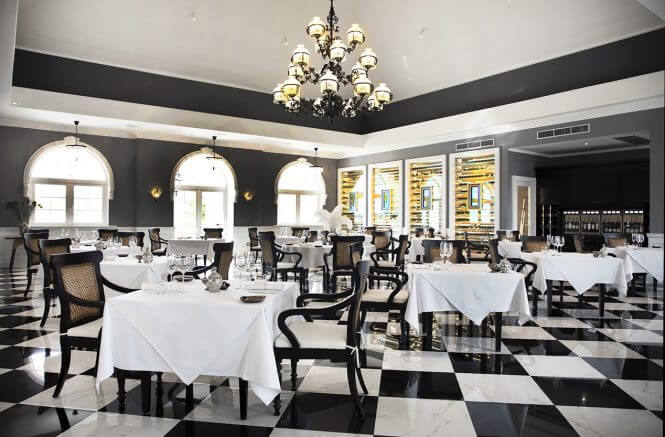 The restaurant heats up Ubud’s dining scene with its exquisite eight-course degustation menu, developed by a colorblind chef and his team.

The sun is setting over Apéritif, a fine-dining restaurant housed in a colonial-style mansion within the verdant grounds of Viceroy Bali, a signal that dinner service is about to begin. Before entering the building, which is decked out in a Roaring Twenties-type interior, I tell the restaurant’s executive chef: “Thanks for plating the gloriously pink sunset; it’s a shining entrée.”
“Sorry, I can’t see it,” he replies. “I’m colorblind.”
Nic Vanderbeeken, who hails from Belgium and has amassed 20 years of culinary experience all over the world, may not be able to distinguish reds from greens but that doesn’t stop him from developing dishes that not only taste good, but look good.
Having been based in Bali for the past five years, Vanderbeekenfinally decided to open his own venue, Apéritif — steps away from his former kitchen at Viceroy Bali’s award-winning dining haunt, CasCades. Apéritif’s gastronomical approach is one that reflects global haute cuisine, albeit with a tinge of Indonesian influence.

Vanderbeeken includes a bold, almost glamorized rendition of karedok—West Java’s raw vegetable salad doused in peanut sauce—on the curated eight-course menu offered at Apéritif. Perfectly cut strips of pickled cabbage, cucumber, lettuce, and other greens are carefully wrapped to look like a budding flower. This rainbow-hued appetizer is a clear homage to the restaurant’s homeland and the recipe for its peanut sauce comes from the chef’s Indonesian wife.
When it comes to meats, Vanderbeeken’s impaired vision becomes an issue. “It’s like having night vision so either I rely on my sense of smell or simply ask my team for help,” he says. But, mere techniques and skills seem secondary to the Apéritif team. Their first concern? High-quality ingredients. And sourcing for only the best means shipping in Spanish ibérico pork and blue crab from Papua New Guinea.

While most key ingredients on the menu are imported, Vanderbeeken has recently managed to find good pork farmed in the northern highlands of Bali that’s now sitting in the kitchen as it cures. Bali is also known for its fresh fish so that’s all locally sourced. Of course, most of the vegetables come straight from Viceroy Bali’s own greenhouse.
Lombok oysters clearly passed the test as well. Shucking the amazingly fresh mollusks—made even more exceptional with a beautiful dressing of yogurt, lemon whey, spirulina seaweed, pickled mustard seed, and smoked oyster emulsion—served as an amuse-bouche at the adjoining bar, one can only imagine the types of fare that await at the restaurant.
True to the venue’s name, the eight-course meal begins only after a round of aperitifs. Once the drinks have been finished, patrons are ushered into the spacious dining area with a clear view of the open kitchen, where chef Vanderbeeken and his team are in full view, commanding their post amid ultramodern equipment that was custom-made for the restaurant.

A tomato tart starts off the dinner, followed by a delicious ceviche of parrotfish. “The ceviche is sort of like three countries on one plate,” Vanderbeeken explains. “There’s the Japanese hijiki(a kind of seaweed) wrapped around the fish dressed in Peruvian Leche de tigre. We added coconut milk too, which makes it similar to kinilaw, a dish native to the Philippines.”
For a truly whirlwind, world-to-Bali (or Bali-to-world) experience, indulge in the wine pairing option, which sees the karedok washed down smoothly with a glass of Chilean Chardonnay. Mains include choices between ibérico pork or duck magret; Papua crab or Canadian lobster. I chose the pork, served with piccalilli, pumpkin, and chicharron, as well as the lobster, immersed in an earthy emulsion of salsify sourced from Bedugul, a town known for its vegetables in Bali’s central highlands. Everyone gets a moreish slab of venison Wellington that features a foie gras core, cut tableside by Vanderbeeken himself. It pairs exceptionally well with a sip of South Africa’s the Boekenhoutskloof The Chocolate Block 2016,a complex blended red wine.

Desserts include apple and brownie cake batters, complete with spatulas for dipping, as the culinary team takes you back to their childhood days of baking with their moms. There’s also an option between Indonesian rujak, a highly beautified version at that, or PB&J—peanut butter panna cotta coated with chocolate made by a Belgian chocolatier based in Yogyakarta, served alongside a classic peanut butter and jelly sandwich in a brown paper bag to enjoy later. The sweet dish is paired with Hatten Wines’ Pino de Bali, a locally made dessert wine.
In spite of having a colorblind chef as its head, the restaurant’s culinary offerings are no doubt colorful.