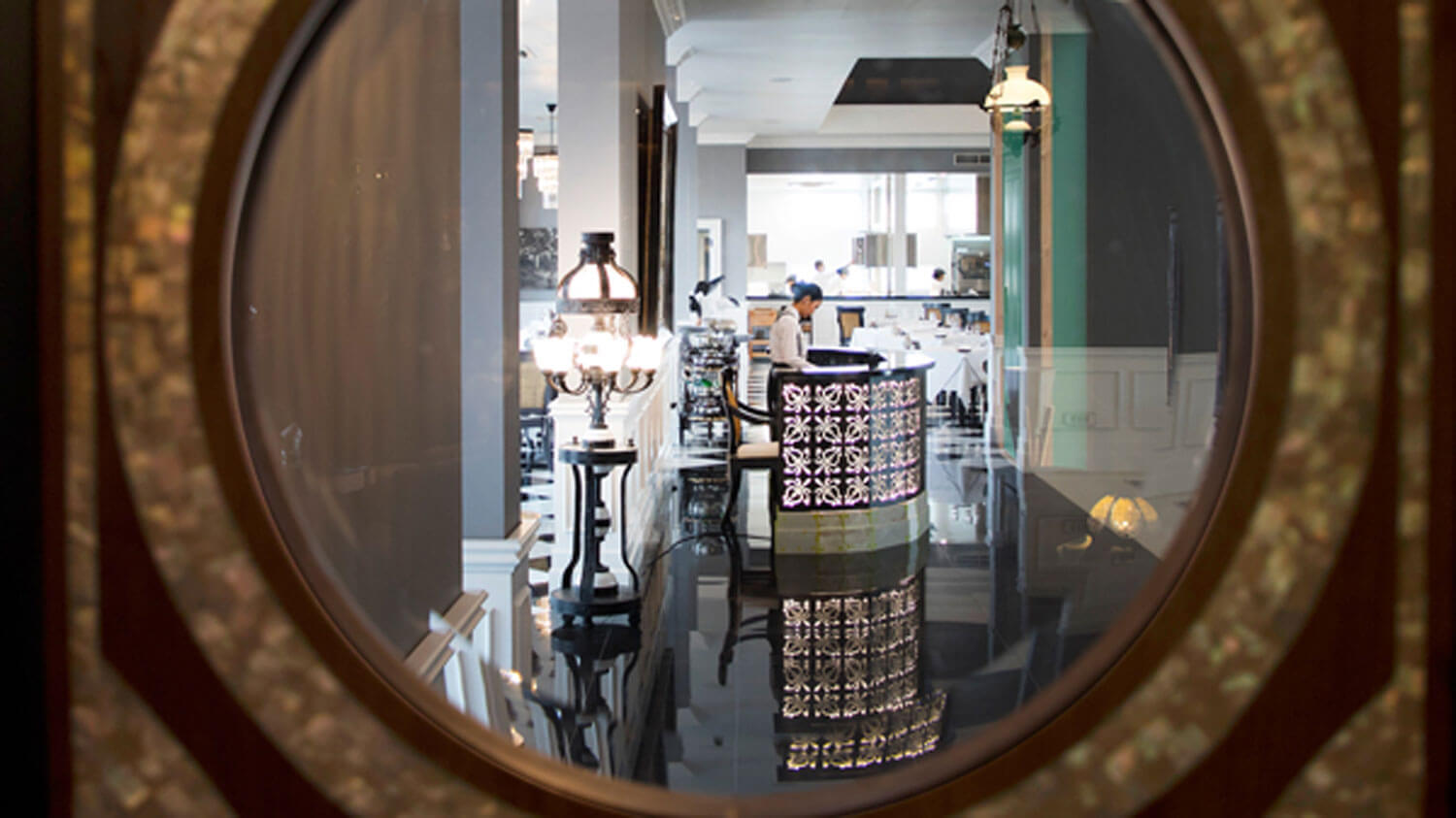 Those who have seen the Hollywood movie ‘Eat, Pray, Love’ might remember that Julia Roberts ate in Italy, prayed in India and found love in Bali. However, with what has been happening in the culinary scene in Bali in recent years, she now might choose to change the order of things and eat in Bali instead. With the opening of Apéritif Restaurant & Bar in 2018, that temptation only became stronger. The new restaurant and bar are located close to the centre of Ubud, on a cliff atop a valley with the Petanu River below and is literally surrounded by rice fields on one side and by the Valley of Kings jungle vista on the other side. On a piece of land next to the family-owned Viceroy Bali hotel, regularly ranked as one of the most luxurious resorts in the world, the same family has decided to create an exclusive and extremely opulent restaurant and bar. The grandeur of the building on the outside, and definitely on the inside, is a first indication of the huge ambitions the family clearly has with this new project.

The idea for Apéritif arose during a discussion between Anthony Syrowatka, the General Manager of Viceroy Bali and member of the owning family, and Nic Vanderbeeken, the Belgian Chef who was in charge of the kitchen at CasCades, Viceroy Bali’s other restaurant. Chef Vanderbeeken had the ambition to focus on a high end culinary project where he did not have to cater for the traditional culinary needs of resort guests. Syrowatka and his family believed in this dream and the idea for Apéritif was born. 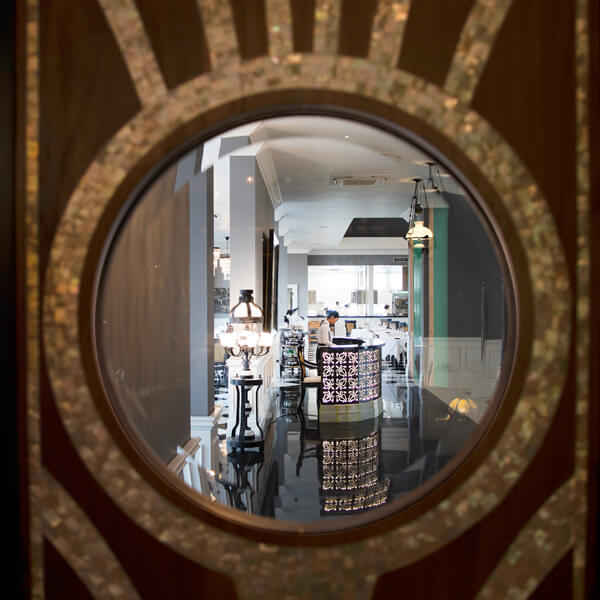 Vanderbeeken is Belgian. At the tender age of fourteen Nic began his first job as a dishwasher in a local restaurant. He loved the atmosphere of a professional kitchen and after one year of causal work as a dishwasher, he had the opportunity to move to another restaurant where he was allowed to assist with the mise en place and where he was encouraged to attend culinary school. The seeds for his career as a chef were planted. After completing his culinary education, Nic worked in several restaurants in Belgium. One of them, Biggles in Wevelgem, he bought and he became Chef Patron. However, only a few years later, during a vacation trip in Bali, he decided to completely change his life by selling his restaurant and moving to Asia. After a stint in Vietnam, he ended up in Bali where he became chef of CasCades restaurant in the Viceroy Bali hotel.

Apéritif is the brainchild of the Viceroy Bali owners, however operates independently to the hotel. The goal was to create a restaurant which was unseen in Bali and which breathes luxury from start to finish. The colonial style of the 1920’s seemed to be the perfect concept and was applied throughout the building, in both the bar and the restaurant.

The restaurant got its name from the renowned European tradition to start a dinner with a drink, referred to as an apéritif. Upon arrival in the restaurant, guests are welcomed by a team of charming local hostesses, who accompany the guests to the bar, which is in the same building, but separated from the restaurant dining room.

The bar is in typical New England country style with green walls decorated with stunning paintings created by local artists. Guests can choose to be seated at the bar or in the cosy corners of the room, where they can relax in beautiful chesterfields. The aperitif is included in the price of the menu and guests can pick one from a list of about ten cocktails, specially created and pimped for Apéritif by Ran Van Ongevalle, the Belgian winner of the prestigious global Bacardi Legacy cocktail competition. While the signature cocktail, Tamarillo Negroni, was pleasant, it was especially the Lemon 3 Times creation that we experienced as a perfect start for the dinner. The fresh and slightly sour cocktail worked perfectly as a palate cleanser and triggered hunger for more. Hunger, which could immediately be addressed by trying the first three canapes that were served in the bar. Especially the beetroot macaron with goat cheese, made us curious for more. For much more. Once the guests are ready, they are guided into the magnificent restaurant dining room where the culinary pampering by Chef Vanderbeeken really starts.

Nic describes his cooking style as global, eclectic cuisine, and he aims at bringing cross cultural food without borders. As such, techniques and products from totally different regions are combined together in one plate. Vanderbeeken does not specialize in one specific cooking technique or style but he applies techniques from different continents, depending on which approach gets the best taste out of the product. And the product is crucial for him. Even though he tries to source ingredients locally as much as he can, if he cannot find the highest quality in Bali, he sources the products from other regions. Even though this increases his eco-footprint, the chef is doing continuous efforts to work as environmentally friendly as possible. Those efforts can be seen in the kitchen, where cooking is done on induction, a zero-waste policy is in place for ingredients, and if there is waste, it is being sorted depending on the fact whether it can be recycled or not.

Guests are presented an eight-course menu, in which for some of the courses several options are being offered. The chef aims at changing the entire menu every three months. The menu starts light and rather acidic and evolves to stronger tastes further down. During our several visits, we tasted every dish on the menu, and while creations such as the Martino, a pimped version of a famous sandwich from the chef’s home country Belgium, and the Karedok, Vanderbeeken’s creative version of a West-Java salad, are really great, it is especially the Canadian lobster dish and the Venison Wellington that in our opinion will fast become signature dishes. Vanderbeeken serves the lobster with salsify, a vegetable that is commonly eaten in Belgium during winter time, and that pairs perfectly with the lobster. With caviar he adds a nice salty touch to the dish. The Venison Wellington is cut table side by the chef himself. Gordon Ramsay has globally raised the bar when wellingtons are being tasted. In Vanderbeeken’s version, the perfectly cooked venison meat is stuffed with foie gras and comes with a rendang sauce. When Nic served venison in his restaurant in Belgium, he used to add speculoos, a cookie which taste is strongly influenced by cinnamon, to the sauce. With cinnamon also being an important ingredient of rendang sauce, the inspiration for this divine dish was found.

If the food itself would not yet be enough to convince the most demanding guest, being able to sample it in such a lush and luxury environment, makes it hard not to be impressed. Maitre d’hotel I Made Yudiana makes sure an attentive, flawless and very polite service is being delivered by his team. They aim at adapting their style to the expectations of the customers and do a great job. Even though the opulent environment, the experience does not become stiff or boring. I Made Yudiana clearly also got a significant budget to build the wine cellar. More than 180 labels are available and on display in the restaurant, with some absolute top wines being available such as Petrus, Château Mouton Rothschild or Château d’Yquem. There is also the option to choose for wine pairing, which comes in two versions, the normal one and the grand cru version.

The Syrowatka family together with Chef Vanderbeeken have created a unique dining experience in Ubud. Apéritif only opened recently and will most likely still further evolve over time. Vanderbeeken will need to make sure to keep his creativity at this high level when he develops the future menus. But for now, if you are lucky enough to spend some time on the beautiful island of Bali, we can only strongly recommend you to indulge in the beautiful Viceroy Bali hotel and to discover the divine global eclectic cuisine of Apéritif.

Apéritif scored 88 points of 100 points in our rating system.​View our Top 60 of the world.